The Special Ways and Technique to Grow Tulip 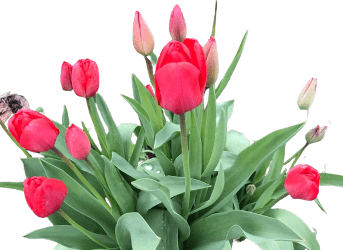 Tulip is a flowering plant that grows in certain months and has an important place all over the world. Tulips are fragrant and grow in a variety of colors during the planting months, making gardens beautiful. The tulip flower’s plant growth cycle can be defined by the climate and sol requirements. There are numerous factors that influence flower growth, development, and maturity, including flower environment and climate. Temperature, radiance, and humidity are the main causes of flowering. In terms of economics, bulbs tulip and flower planting usually produce a separate company due to the differing needs for culture method, sol, and climate.

Keep the bulbs at 30 degrees while it is in the prone steps (flower formatting). This approach can increase the growth of the thrive. By comparing the shoots’ potential at high and low temperatures, the shoots’ potential decreases. The amount of tulip bulbs stored at a low temperature has a differentiating effect, resulting in the mortality of shoots stored at a slightly higher temperature. The real leaf is produced by the first stamen portion following high storage temperature, as opposed to lower storage temperature. The temperature is the biggest tulıp productıon component, according to this research.

The Season of Tulıp Flower

The optimal time to start planting tulip bulbs is the second week following harvest. July will be 28 degrees, August will be 25 degrees, September will be 20 degrees, October will be 20 degrees, October will be 17 degrees, and November will be 15 degrees. Planting might not be possible until November. What is the best month to plant tulip bulbs? The root’s growth and development are influenced by temperature. The suitable to roots grew when the temperature was set to 14-16 degrees. If the temperature is lower towards the conclusion of the planting procedure, the roots that have formed may be sensitive to winter, causing the bulbs may freeze. Plant development begins earlier as the winter becomes warmer.

Tulips should be planted in full sunlight and shielded from the wind. However, in warm environments such as the Mediterranean and Aegean, it is best to grow it in a shaded area that receives little direct sunlight, as the blossoms can wilt fast if exposed to too much sunlight. The flower’s life is shortened in an extremely sunny atmosphere. The frequency of blossoms will be reduced if there is too much shade. Planting in this area should be avoided since too much wind is bad for plants and flowers.

Tulips require soil that is loamy, permeable, humus-rich, fertile, and has a high water-holding capacity. It also can be grown in a variety of soils. The soil in which it grows should be at least 50 centimeters thick. Because sand particles, also known as light soils, are content of organic matter, they have a low water holding capacity. The bulbs will not rot because there is no water accumulation. The excessive amount of sand, on the other hand, causes the soil to dry out quickly and need additional watering. It is not recommended for regular irrigation because soil substances are washed away and drop to the deeper layers of the root area, affecting bulbs development. It’s simple to operate with light soil. As a result, planting and unloading processes are expedited. As a result, planting and unloading procedures are clear and simple. Animal excrement that has been burned should be used to improve soil structure.

Soil is important in the cultivation of tuber crops, just as it is in other fields of agriculture. This is aim to suitable circumstances from the soil to be cultivated in condition for it to grow. To do this, the soil is loosened and regulated in any way possible. The physical, chemical, and biological structure of the soil must be kept at a good level of the combination for the healthy development of tulips. Plant nutrition requires at least of 50 cm of soil. Plant currents might also be spread in this section. As a result, in early autumn, the soil should be plowed to a depth of 30 cm. There are the advantages of plowing in the fall such as;

Healthy soil is permeable and capable of storing the water required for plant growth. Excess moisture must be avoided when growing root crops in high-humidity soil. Protecting the bulbs from water during the tulip blooming period untill late October is more essential than feeding the plant. For bulb growth, roots to do their work comfortably without drowning in too much water, and microorganisms to function properly, there must be enough air in the soil. Excess water can be removed from the soil by cultivating it carefully.

The character of the soil is an important consideration when preparing it for planting. If the soil where its tulip bulbs will be planted has dried out throughout the summer, it should be watered at least 15 days before planting. As soon as the seeds arrives, the soil should be placed at a depth of 30 cm after irrigation. Various plant remnants on the vulnerable soil’s surface must first be removed. A trunk with a length of 1 meter and a width of 1 meter is prepared in a predefined location based on the size of the land, with half a meter used for walking space.

In October and November, the line method is used to plant. For existing specifications ventilation, plants should be planted in the direction of the prevailing wind. The soil must be plowed since the structure of the soil and any residual water bodies will create disease . Tulip bulbs come in a variety of sizes and are planted at a depth of 10-13 cm on average. Tubers can be planted at a depth of 6-7 cm in heavy soil, then separated 100 cm between lines and 30-40 cm between lines. Bulbs are planted 5-10 cm away, depending on their size. The leaves of tulips planted tightly together do not have a lot of room to grow. Late planting damages the roots and wastes part of the carbohydrates that the tubers have acquired. The month of tulip planting The growth of followers is also influenced. Depending on the weather, bulbs begins to grow in late March or early April. When planting, keep the size and color of the plants consistent. In a one-square-meter area, 150-250 tubers can be planted on average. The most common bulb disease is root rot. The soil and bulbs must be sterilized prior to planting. Disinfection of bulbs that will be planted where vegetables were previously grown should be given special attention.

To continue their normal development, plants take water from the soil through their roots. Plants which bloom in the spring, such as tulips, begin to bloom in the early spring. Early spring rainfall is sufficient to satisfy the water requirements of the plant growth process. If there isn’t enough rain during this time, the water shortage in the soil will have to be filled with irrigation water. Tulips require water for optimum development, longevity, and bulb growth. Water must be provided artificially if it is not provided naturally. Irrigation schemes must be implemented to ensure the success of farming, taking into account soil characteristics, rainfall patterns, and crop requirements. The development of tulip bulbs requires adequate moisture in the soil during the development phase. Shorter development periods, slower or slower development, less and shorter flowering, tiny leaf area of short flower plants, and decreased bulb production are all signs of a lack of water in the soil.

The importance of irrigation is better described when considering the factors of bulb production in marketing. The water in a tulip is lost through breathing. Wind speed, air temperature, and humidity are all elements that contribute to water loss. The lack of water in the tulip’s root zone is critical for the production and development of new shoots. The production of tulip bulbs is affected by drought, which causes early exfoliation of plant tops and lower shallot yields. Late watering causes flower buds to become less differentiated. The amount of water required is mostly determined by the soil structure and the stage of plant development. In the beginning or last stages of plant growth, such as flowering, more water is used than with irrigation. In suitable soils, irrigation water is used less, but in sandy soils, it may be used more. Watering should be avoided during this period, as the plant’s leaves begin to turn yellow after distributing the seeds.

7 thoughts on “The Special Ways and Technique to Grow Tulip”